What’s going on with Higgs particle?

The aftermath of the EPS Conference is quite exciting on a side. Higgs hunting points to an unexpected direction even if some residuals of an old expectation are still there. I just want to show you the graphs of this conference from Tevatron and LHC 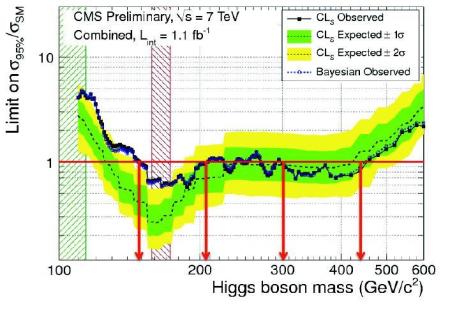 From these it is very clear that the excluded range of mass is become significantly large restricting the possibilities to the intervals of a mass around 140 GeV or to a massive Higgs implying a strongly coupled theory. The evidence for a 140 GeV Higgs particle is yet small, about two sigmas, and we cannot exclude that this is a fluke but, to support this clue, it appears both at Tevatron and LHC. A small peak at around 250 GeV is seen only by ATLAS and could disappear in the future.

What I would like to emphasize here is that the possibility of a strongly coupled Higgs is well alive and this can have deep implications for the model and physics at large. There are several reasons for this. First of all, a strongly coupled Higgs field implies supersymmetry (see here). This result is inescapable and some breaking pattern of supersymmetry must be devised to get the right mass spectrum of the Standard Model. But this is already old and well-acquired matter. The most important point is that there will be a completely new way to approach quantum field theory. So far, quantum field theory has been managed just using weak perturbation theory but a strongly coupled Higgs would mean that we will also have to devise a perturbative technique the other way round, i.e. with a coupling increasingly large.

So, I will keep on support this view of a heavy Higgs as, being a theoretical physicist, consequences will be devastating and largely more exciting of any other possibility. We will be eager to see the improvement in the next months from the measurement datasets. Certainly, on 2012 all the curtains will be definitely down.