Summer days are gone and I am back to work. I thought that Terry Tao’s criticism to my work was finally settled and his intervention was a good one indeed. Of course, people just remember the criticism but not how the question evolved since then (it was 2009!). Terry’s point was that the mapping given here between the scalar field solutions and the Yang-Mills field in the classical limit cannot be exact as it is not granted that they represent an extreme for the Yang-Mills functional. In this way the conclusions given in the paper are not granted being based on this proof. The problem can be traced back to the gauge invariance of the Yang-Mills theory that is explicitly broken in this case.

Terry Tao, in a private communication, asked me to provide a paper, to be published on a refereed journal, that fixed the problem. In such a case the question would have been settled in a way or another. E.g., also a result disproving completely the mapping would have been good, disproving also my published paper.

This matter is rather curious as, if you fix the gauge to be Lorenz (Landau), the mapping is exact. But the possible gauge choices are infinite and so, there seems to be infinite cases where the mapping theorem appears to fail. The lucky case is that lattice computations are generally performed in Landau gauge and when you do quantum field theory a gauge must be chosen. So, is the mapping theorem really false or one can change it to fix it all?

In order to clarify this situation, I decided to solve the classical equations of the Yang-Mills theory perturbatively in the strong coupling limit. Please, note that today I am the only one in the World able to perform such a computation having completely invented the techniques to do perturbation theory when a perturbation is taken to go to infinity (sorry, no AdS/CFT here but I can surely support it). You will note that this is the opposite limit to standard perturbation theory when one is looking for a parameter that goes to zero. I succeeded in doing so and put a paper on arxiv (see here) that was finally published the same year, 2009.

The theorem changed in this way:

The mapping exists in the asymptotic limit of the coupling running to infinity (leading order), with the notable exception of the Lorenz (Landau) gauge where it is exact.

So, I sighed with relief. The reason was that the conclusions of my paper on propagators were correct. But these hold asymptotically in the limit of a strong coupling. This is just what one needs in the infrared limit where Yang-Mills theory becomes strongly coupled and this is the main reason to solve it on the lattice. I cited my work on Tao’s site, Dispersive Wiki. I am a contributor to this site. Terry Tao declared the question definitively settled with the mapping theorem holding asymptotically (see here).

In the end, we were both right. Tao’s criticism was deeply helpful while my conclusions on the propagators were correct. Indeed, my gluon propagator agrees perfectly well, in the infrared limit, with the data from the largest lattice used in computations so far  (see here) 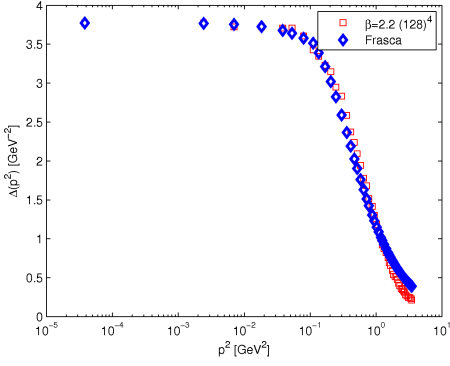 As generally happens in these cases, the only fact that remains is the original criticism by a great mathematician (and Terry is) that invalidated my work (see here for a question on Physics Stackexchange). As you can see by the tenths of papers I published since then, my work stands and stands very well. Maybe, it would be time to ask the author.

This entry was posted on Saturday, September 21st, 2013 at 2:27 pm and is filed under Applied Mathematics, Discussions, Mathematical Physics, Particle Physics, Physics, QCD. You can follow any responses to this entry through the RSS 2.0 feed. You can leave a response, or trackback from your own site.

4 Responses to Ending and consequences of Terry Tao’s criticism