Where we are now?

Summer conferences passed by, we have more precise data on the Higgs particle and some new results were announced. So far, this particle appears more and more in agreement with the Standard Model expectations without no surprise in view. Several measurements were performed with the full dataset at 140

. Most commentators avoid to tell about this because it does not warrant click-bait anymore. At EPS-HEP 2019 in Ghent (Belgium), the following slide was presented by Hulin Wang on behalf of the ATLAS Collaboration 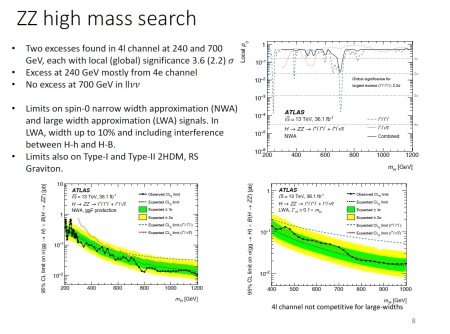 There appears to be an excess at 250 GeV and another at 700 GeV but we are talking of about 2 sigma, nothing relevant. Besides, ATLAS keeps on seeing an excess in the vector boson fusion for ZZ decay, again about 2 sigma, but CMS sees nothing, rather they are somewhat on the missing side!

No evidence of supersymmetry whatsoever, neither the multiplet of Higgs nor charged Higgs are seen that could hint to supersymmetry. I would like to remember that some researchers were able to obtain the minimal supersymmetric standard model from string theory and so, this is a diriment aspect of the experimental search. Is the Higgs particle just the first one of an extended sector of electroweak (soft) supersymmetry breaking?

So, why could the slide I just posted be so important? The interesting fact is the factor 2 between the mass of this presumed new resonance and that of the Higgs particle. The Higgs sector of the Standard Model can be removed from it and treated independently. Then, one can solve it exactly and the spectrum is given by an integer multiple of the mass of the Higgs particle. This is exactly the spectrum of a Kaluza-Klein particle and it would represents an indirect proof of the existence of another dimension in space. So, if confirmed, we would move from a desolating scenario with no new (beyond standard model) physics in view to a completely overturned situation! We could send all the critics back to sleep wishing them a better luck for the next tentative.

Back to reality, the slide yields the result for the dataset of 36.1

and no confirmation from CMS has ever arrived. We can just hope that the dreaming scenario takes life.

This entry was posted on Tuesday, August 13th, 2019 at 7:59 pm and is filed under Conference, Particle Physics, Physics. You can follow any responses to this entry through the RSS 2.0 feed. You can leave a response, or trackback from your own site.