He will be part of history but through a harsh lesson we all learned. He remembers me another character of history of physics in a similar situation, Prosper-René Blondlot and N ray affair. So, science is a self-correcting process but some of the bad consequences could be easily avoided. It is indeed difficult in our epoch to hide information as we have a lot more media and channels where this can escape. But prudence is always the best choice. Waiting some other weeks before calling media would have saved Ereditato’s head.

Johnson noise and its square root: The video

We have uploaded the video of the measurement of the square root of Johnson noise:

This will participate to the Google Science Fair 2012.

Johnson noise and its square root

Following my recent work on stochastic processes and quantum mechanics (see here and here), after I showed its existence with numerical computation (see here), this time I moved one step forward with an experimental setup. The idea come out from my son Giorgio. He is a teen with a lot of ideas and was of real help to assemble all the  apparatus.

In order to try to see how my mathematics for stochastic processes could be applied to a real stochastic motion I needed a natural source to start with. The best and easier to manage of this is Johnson-Nyquist thermal noise in a resistance.

This effect is really small being of the order of nV and so we were in need for some significant instrumentation. To buy it was impossible as this is generally very highly priced and not affordable for amateur efforts. There is some hope from ebay

to find some old apparatus but one is not granted to have it in fully order and, in any case, this should come from US and so one have to incur in a lot of problems, not least time to deliver, that make us desist. The next step was to find in the known literature a possible circuit for a very low noise and high gain preamaplier that we could realize just buying components. Looking around with google I have found this paper by Graziella Scandurra, Gianluca Cannatà, and Carmine Ciofi of University of Messina in Italy. I wrote to Dr. Scandurra to ask some clarifications and she was so kind to pointing me out toward another circuit that fitted better my needs, similar to the one I have found, published in this paper. The circuit given by the same authors in the latter is used in the former but in a differential topology. For my aims, a differential preamplifier was not needed and so I followed the advice by Dr. Scandurra and opted for the simplest circuital solution. Unfortunately, this circuit used a IF3602 by Interfet. This is a dual N-channel jfet in a single package having a very low noise figure and high gain. This component is practically impossible to find and the only way to get is to order it through some reseller with a large number of items at a high price. Not the best for me. So, I was in need for a substitute. A colleague of mine, Massimiliano Rossi (former researcher at Tor Vergata University in Rome) pointed me out the Toshiba jfet 2SK170BL normally used in audio applications. Looking at the datasheet this appears well suited to substitute the IF3602 but this comes singly packaged. I solved this issue by buying a matched quad on ebay and using a pair of them.

Last week-end, with the help of my son, I have built the circuit as given in the paper and provided the given substitution. This was the result with the circuit perfectly working 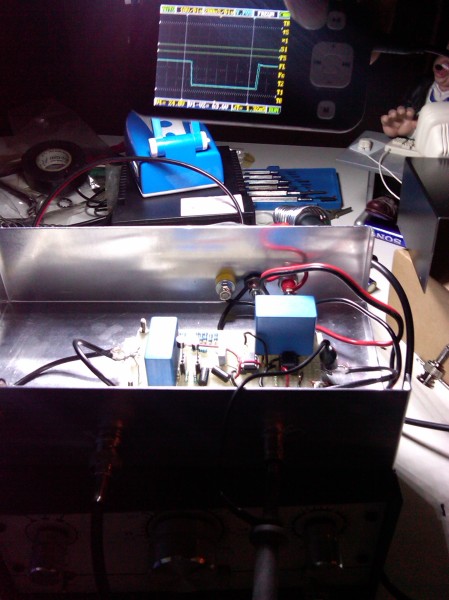 As you can see it is up and running. This circuit, as designed by the researchers of University of Messina, proved to be robust and reliable. So, here is my first measurement using as a device under test a potentiometer with a maximum of 1 MOhm:

giving the experimental proof of existence for the square root of a stochastic process.

As a final aside, I give here the circuit of the preamplifier with the list of components for those aiming to realize it:

As said above, you can substitute the IF3602 with a matched pair of 2SK170BL by Toshiba at very low cost.

So, we can conclude that the square root of a stochastic process, as given in my paper, exists and is meaningful both numerically and experimentally.

In these days, at Moriond (La Thuile indeed, a great ski station) on Italian Alps, a conference is held (see here). Today is the Higgs day and people at Tevatron confirmed the clues found by CERN and announced last December. Higgs particle mass should be around 125 GeV. This has being reverberated on the media (see here). The evidence found at Tevatron is about two sigma (one percent probability that is not a fluctuation in the data) and so, one cannot claim a discovery and well below the three sigma evidence from CERN. For a final word we will have to wait summer conferences and new data from the restart of LHC at April.

Update: Matt Strassler is pointing out in his blog that ATLAS has now a lower evidence for the Higgs particle than in last December. This seems something like the fluctuation of the last summer. Evidence for this would be now 10%.