Nailing down the Yang-Mills problem

Millennium problems represent a major challenge for physicists and mathematicians. So far, the only one that has been solved was the Poincaré conjecture (now a theorem) by Grisha Perelman. For people working in strong interactions and quantum chromodynamics, the most interesting of such problems is the Yang-Mills mass gap and existence problem. The solutions of this problem would imply a lot of consequences in physics and one of the most important of these is a deep understanding of confinement of quarks inside hadrons. So far, there seems to be no solution to it but things do not stay exactly in this way. A significant number of researchers has performed lattice computations to obtain the propagators of the theory in the full range of energy from infrared to ultraviolet providing us a deep understanding of what is going on here (see Yang-Mills article on Wikipedia). The propagators to be considered are those for  the gluon and the ghost. There has been a significant effort from theoretical physicists in the last twenty years to answer this question. It is not so widely known in the community but it should because the work of this people could be the starting point for a great innovation in physics. In these days, on arxiv a paper by Axel Maas gives a great recount of the situation of these lattice computations (see here). Axel has been an important contributor to this research area and the current understanding of the behavior of the Yang-Mills theory in two dimensions owes a lot to him. In this paper, Axel presents his computations on large volumes for Yang-Mills theory on the lattice in 2, 3 and 4 dimensions in the SU(2) case. These computations are generally performed in the Landau gauge (propagators are gauge dependent quantities) being the most favorable for them. In four dimensions the lattice is

, not the largest but surely enough for the aims of the paper. Of course, no surprise comes out with respect what people found starting from 2007. The scenario is well settled and is this:

Here follows the figure for the gluon propagator 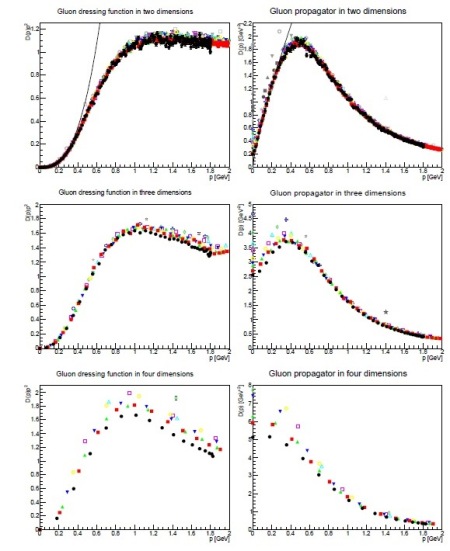 and for the running coupling

There is some concern for people about the running coupling. There is a recurring prejudice in Yang-Mills theory, without any support both theoretical or experimental, that the theory should be not trivial in the infrared. So, the running coupling should not go to zero lowering momenta but reach a finite non-zero value. Of course, a pure Yang-Mills theory in nature does not exist and it is very difficult to get an understanding here. But, in 2 and 3 dimensions, the point is that the gluon propagator is very similar to a free one, the ghost propagator is certainly a free one and then, using the duck test: If it looks like a duck, swims like a duck, and quacks like a duck, then it probably is a duck, the theory is really trivial also in the infrared limit. Currently, there are two people in the World that have recognized a duck here:  Axel Weber (see here and here) using renormalization group and me (see here, here and here). Now, claiming to see a duck where all others are pretending to tell a dinosaur does not make you the most popular guy  in the district. But so it goes.

These lattice computations are an important cornerstone in the search for the behavior of a Yang-Mills theory. Whoever aims to present to the World his petty theory for the solution of the Millennium prize must comply with these results showing that his theory is able to reproduce them. Otherwise what he has is just rubbish.

What appears in the sight is also the proof of existence of the theory. Having two trivial fixed points, the theory is Gaussian in these limits exactly as the scalar field theory. A Gaussian theory is the simplest example we know of a quantum field theory that is proven to exist. Could one recover the missing part between the two trivial fixed points as also happens for the scalar theory? In the end, it is possible that a Yang-Mills theory is just the vectorial counterpart of the well-known scalar field, the workhorse of all the scholars in quantum field theory.

Dennis Overbye is one of the best science writer around. Recently, he wrote a beautiful piece on the odd behavior of non-converging series like

and so on to infinity (see here). This article contains a wonderful video, this one

where it shown why

and this happens only when this series is taken going to infinity. You can also see a 21 minutes video on the same argument from these authors

This is really odd as we are summing up all positive terms and in the end one gets a negative result. This was a question that already bothered Euler and is generally fixed with the Riemann zeta function. Now, if you talk with a mathematician, you will be warned that such a series is not converging and indeed intermediate results become even more larger as the sum is performed. So, this series should be generally discarded when you meet it in your computations in physics or engineering. We know that things do not stay this way as nature already patched it. The reason is exactly this: Infinity does not exist in nature and whenever one is met nature already fixed it, whatever a mathematician could say. Of course, smarter mathematicians are well aware of this as you can read from Terry Tao’s blog. Indeed, Terry Tao is one of the smartest living mathematicians. One of his latest successes is to have found a problem in the presumed Otelbaev’s proof of the existence of solutions to Navier-Stokes equations, a well-known millennium problem (see the accepted answer and comments here).

This idea is well-known to physicists and when an infinity is met we have invented a series of techniques to remove it in the way nature has chosen. This can be seen from the striking agreement between computed and measured quantities in some quantum field theories, not last the Standard Model. E.g. the gyromagnetic ratio of the electron agrees to one part on a trillion with the measured quantity (see here). This perfection in the computations was never seen before in physics and belongs to the great revolution that was completed by Feynman, Schwinger, Tomonaga and Dyson that we have inherited in the Standard Model, the latest and greatest revolution seen so far in particle physics. We just hope that LHC will uncover the next one at the restart of operations. It is possible again that nature will have found further ways to patch infinities and one of these could be

So, we recall one of the greatest principles of physics: Nature patches infinities and use techniques to do it that are generally disgusting mathematicians. I think that diverging series should be taught at undergraduate level courses. Maybe, using the standard textbook by Hardy (see here). These are not just pathologies in an otherwise wonderful world but rather these are the ways nature has chosen to behave!

The reason for me to write about this matter is linked to a beautiful work I did with my colleagues Alfonso Farina and Matteo Sedehi on the way the Tartaglia-Pascal triangle generalizes in quantum mechanics. We arrived at the conclusion that quantum mechanics arises as the square root of a Brownian motion. We have got a paper published on this matter (see here or you can see the Latest Draft). Of course, the idea to extract the square root of a Wiener process is something that was disgusting mathematicians, mostly Didier Piau, that was claiming that an infinity goes around. Of course, if I have a sequence of random numbers, these are finite, I can arbitrarily take their square root. Indeed, this is what one sees working with Matlab that easily recovers our formula for this process. So, what does it happen to the infinity found by Piau? Nothing, but nature already patched it.

So, we learned a beautiful lesson from nature: The only way to know her choices is to ask her.

I would like to have a lot more time to write on my blog. Indeed, time is something I have no often and also the connection is not so good as I would like in the places I spend most of it. So, I take this moment to give an update of what I have seen around in these days.

LHC has found no evidence of dark matter so far (see here). Dark matter appears even more difficult to see and theory is not able to help the search. This is also one of our major venues to go beyond the Standard Model. On the other side, ASACUSA experiment at CERN produced the first beam of antihydpogen atoms (see here, this article is free to read). We expect no relevant news about the very nature of Higgs until, on 2015, LHC will restart. It must be said that the data collected so far are saying to us that this particle is behaving very nearly as that postulated by Weinberg on 1967.

In these days there has been some fuss about the realization in laboratory of a Dirac magnetic monopole (see here).  Notwithstanding this is a really beautiful experiment, nobody has seen a magnetic monopole so far. It is a simulation performed with another physical system: A BEC. This is a successful technology that will permit us an even better understanding of physical systems that are difficult to observe. Studies are ongoing to realize a simulation of  Hawking radiation in such a system.  Even if this is the state of affairs, I have read in social networks and in the news that a magnetic monopole was seen in laboratory. Of course, this is not true.

The question of black holes is always at the top of the list of the main problems in physics. Mostly when a master of physics comes out with a new point of view. So, a lot of  fuss arose from this article in Nature involving a new idea from Stephen Hawking that the author published in a paper on arxiv (see here). Beyond the resounding title, Hawking is just proposing a way to avoid the concept of firewalls that was at the center of a hot debate in the last months. Again we recognize that a journalist is not making a good job but is generating a lot of noise around and noise can hide a signal very well.

Finally, we hope in a better year in science communication. The start was somewhat disappointing.